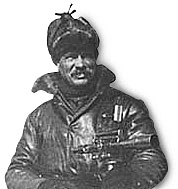 The 1903-04 mission to China was Maine native R. Harvey Sargent’s first adventure abroad. During the expedition, Sargent collected data for topographic maps, which in 1910 won a gold medal from the Geographic Society of France.
He went on to a productive career as explorer, mapmaker, author, educator, and lecturer. Sargent spent 28 mapping seasons in Alaska, returned to China in 1917 to lecture at the Military Mapping Institute, and conducted early topographic mapmaking operations in South America.

His many accomplishments include discovery of Aniakchak Crater (the world’s largest extinct volcano, now the Aniakchak National Monument), discovery of the largest ice cap on U.S. territory, and collaboration with the U.S. Navy in 1929 on pioneer aerial mapping operations.

Son of a master mariner, and a product of the best traditions and value systems of rural Maine, Harvey Sargent became a model for three succeeding generations of public servants.